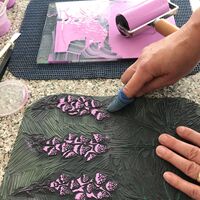 Linocut is a form of relief printing. There are various types of lino available for art purposes, ranging from the traditional, made from linseed oil and cork, to various vinyl and plastic based products. Whichever is used the carving process is the same. An image is cut into a Lino block using specialised gouges and knives, the block is then inked with a roller (brayer.) Only the raised areas will receive the ink so that when the paper is pressed onto the Lino, only the image of the inked areas is transferred to the paper.

A reduction print is more complicated: a single Lino block is carved “reduced” in stages and the colours are printed in layers from each carved stage. The advantage being that only one block is needed thus reducing materials and also using the same block for each layer /colour means it will exactly line up with what’s gone on before. In printing terms, this lining up is called registration. The multiple layers sit exactly on top of one another and the print makes sense. If the registration is poor, the print will look blurry. I use a very simple method of registration which uses two 90 degree corners fixed on top of each other. Sometimes I like the effect where a print is mis-registered and you can see a sliver of the underneath colour as an accent which adds another dimension to the image. However this effect is usually thought of as undesirable. 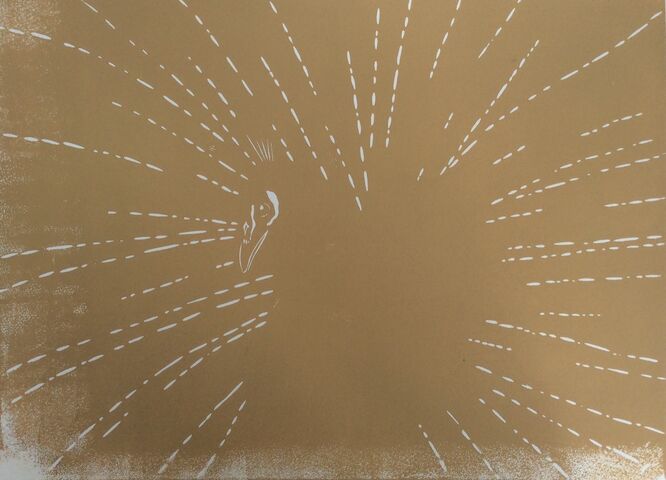 Peacock: 1st layer beige ink onto white paper. In this first stage I have carved away any areas that I want to remain white, such as around the eye, the beak, and the feather quills. Beige ink is rolled onto the lino and the paper is laid on top and printed. The carved areas remain white. 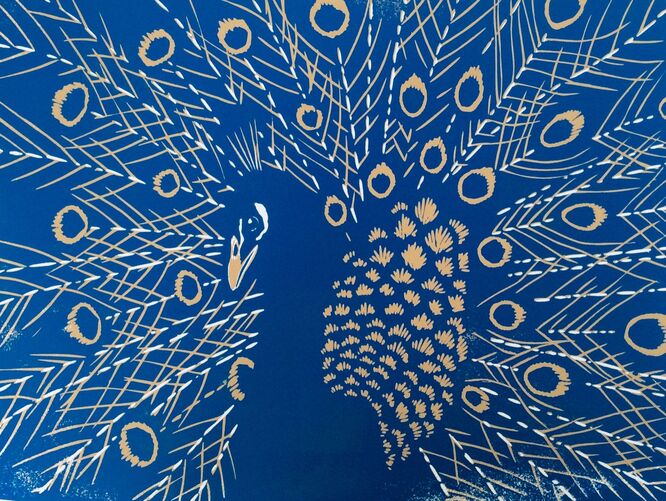 Peacock: 2nd layer blue ink over the beige. The lino block is cleaned and carved again. this time I'm carving away any areas that I want to remain beige, then I ink up and print with the blue. 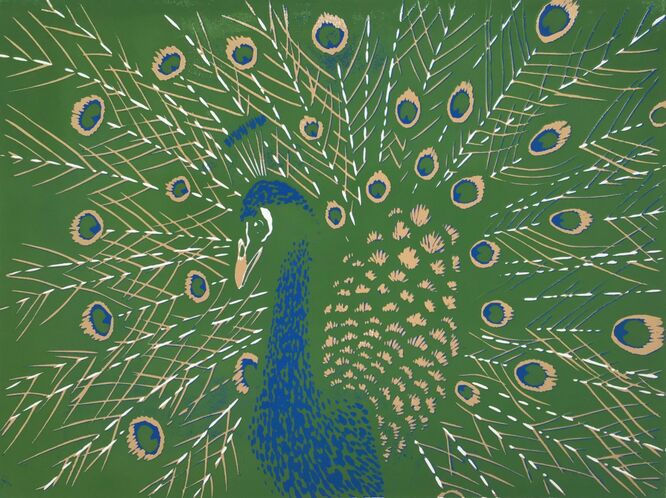 Peacock: 3rd layer green ink over the blue and beige. Now I carve away the areas to be left blue and re-ink with green ink. There are three colours on top of each other and the image is becoming clear. 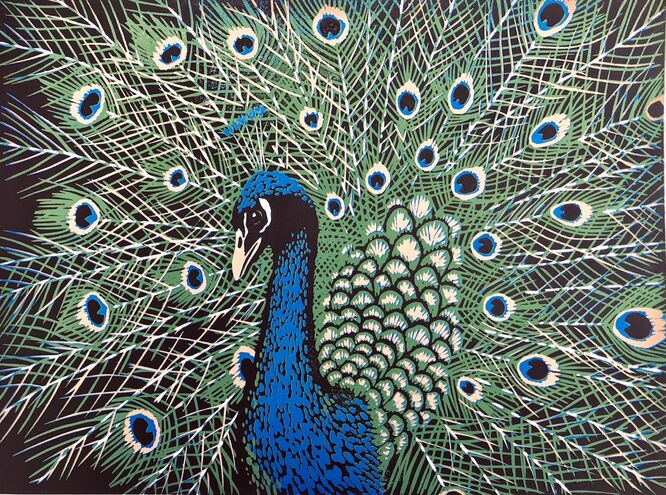 Peacock: 4th and final layer black ink over the green, blue and beige. Once the areas I want to remain green are carved away, I can ink up with black and the image suddenly has depth and shadows.


When is a print not a print?
If I produced an oil painting and I was really pleased with it, I might like to have art prints (Giclee prints) made from the image. I might sell the painting at say, £500, and the prints (identical copies) at say, £50. If I decide to only ever make 50 of these copies, (an edition to 50), the copies would be labelled 1/50, 2/50 etc. (Edition meaning a set that are exactly the same) These are limited edition art prints, and are identical to the original. I may or may not sign these.
Another scenario is that instead of limiting my edition, I might decide that I like my oil painting so much that I will just produce an endless supply of prints from it (open edition). These would not be numbered and not be called limited edition, these are just art prints. These may or may not be signed. 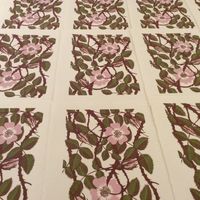 If I make a set of linocut prints, there is no one “original” instead the whole edition are original prints. The image doesn’t exist in any form other than as prints. They are ostensibly identical to each other but also, as they are all produced individually they could have tiny differences in the pressure and inking etc. If I limited the edition to 50, they would still be labelled 1/50, 2/50. These are limited edition original prints, and would usually be signed. Possibly not worth as much as a single oil painting, but as a hand-produced original item, maybe not as cheap as a limited edition art print.

My Reduction prints fall into the category of limited edition original prints. It is physically impossible for more prints to be made once the Lino block has been completely carved.

It is also possible to make an open edition of Lino prints but these would not be reduction prints and would often be one colour prints. In reality, a Lino block could not be used indefinitely, as it would start to degrade at some point.

Printmakers don’t usually have fine art copies of their work made, as it blurs the distinction between art prints and original prints. This is why the only copies I have made of my work are for greetings cards, where by their nature it is quite clear that they are not and could not be original prints.
Next
Previous